How Much Sodium Is In Softened Water? 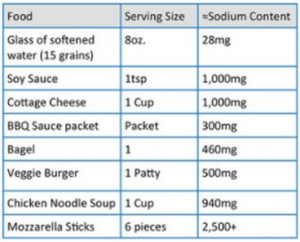 A common question is “How much sodium is in softened water?” The amount of sodium in your water is directly related to your total water hardness. it’s easy math, so lets figure it out together. Municipal water supplies tend to be between 5 to 25 grains per gallon of hardness (on average) though far higher and lower levels are not uncommon. Water softeners use ion exchange resin to collect hardness and in return releases a proportional amount of sodium. According to the WQA (Water Quality Association), for every grain of hardness there will be 30mg of sodium in a gallon after it has been softened.

An 8oz glass of 15 grain softened water contains the equivalent of 28.12 mg of sodium.

Some consumers are concerned that drinking softened water will in-crease the level of sodium in their diet. As demonstrated above this is of little real concern. Softening your water will not result in salty-tasting water. Sodium bicarbonate, which is different from sodium chloride (table salt), is formed through the water softening process and imparts little change to the flavor of the water. If you are on a sodium restricted diet or have excessively high hardness the installation of a Reverse Osmosis drinking water system may be beneficial and recommended.